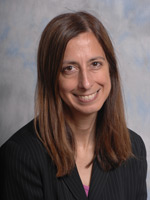 Mary L. Smith is General Counsel at the Illinois Department of Insurance. Ms. Smith is responsible for coordinating the legal aspects of establishing a health care exchange in Illinois, developing plans for troubled companies, and leading major regulatory settlements that benefit Illinois consumers. Previously, Ms. Smith served as Counselor in the Civil Division at the United States Department of Justice and was the highest-ranking Native American political appointee in the entire Department.

Ms Smith is an enrolled member of the Cherokee Nation. Ms. Smith served in the Clinton White House as Associate Counsel to the President and Associate Director of Policy Planning. During her time in the White House, Ms. Smith was the architect for a historic Native American policy initiative which spanned areas such as health care, economic development, education, the digital divide, and criminal justice issues. This initiative resulted in an increase in funding of $1.1 billion for Native American programs across all federal agencies. She was the highest-ranking Native American in the White House during the Clinton Administration. From 1994-96, Ms. Smith served as a trial attorney for the United States Department of Justice Civil Division.